Detailed history of Larmag since it started in 1985, giving insight and information where it all began.

In December 1985, a few months after its inception, Larmag acquired a large portfolio on the Dutch property market; the Ariel Beta portfolio. This portfolio, purchased for Euro 82.7 million, included office buildings in various locations in Amsterdam, Rotterdam, Frankfurt and Paris. Larmag took over management of the portfolio and in less than a year, in October 1986, successfully completed the reorganisation and sale of the portfolio. 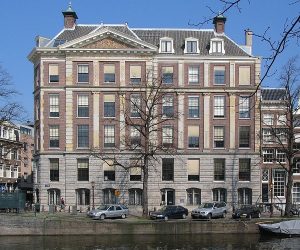 Encouraged by this success, Larmag extended its interests in The Netherlands. In October 1986, Larmag acquired a controlling interest in Pronam NV, a company listed on the Amsterdam Stock Exchange. At the beginning of 1987, Larmag placed all its recently acquired property, with a value of Euro 78.2 million, under the umbrella of Pronam. This was the first step in Larmag’s plan to make Pronam the basis for future property investments and to attract additional finance for ongoing investment opportunities.

During 1987, approximately 740,000 new shares in Pronam were issued at a price of Euro 56.4 per share to part finance acquisitions totaling Euro 159.1 million. Among these acquisitions were two of the three Rotterdam Europoint Towers. The total assets of Pronam rose from Euro 1.4 million at the beginning of 1987, to Euro 272.7 million at the end of that same year. At that point, the total property portfolio amounted to 350,000 m2, with a yearly rental income of Euro 24.5 million. 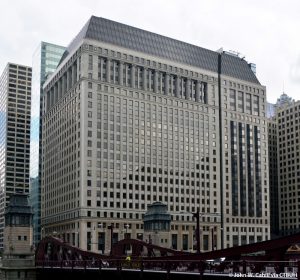 By mid 1988, Pronam shares had risen on the Amsterdam Stock Exchange from a low of Euro 40.90 in November 1987 (one month after Black Monday) to Euro 70.90. Mr. Magnusson commenced negotiations to sell Pronam to a Swedish investment company.

In the summer of 1988, the sale of Pronam was concluded for a total value of Euro 283.6 million, giving the company a net value of more than Euro 90 per share. This sale generated a 60% return on shareholders’ equity over a period of only one year.

In the summer of 1987, Larmag acquired 100% of a Dutch investment company, subsequently renamed Dala Holding NV. During 1987 and 1988, the company acquired several prime office buildings with a total surface area of some 60,000 m2 mostly in Amsterdam. After the sale of Pronam, Mr. Magnusson, as Chief Executive of Dala Holding, concentrated most of his activities in Dala Holding. Several new buildings were acquired in Amsterdam and Brussels, which were sold at a substantial profit in early 1989. 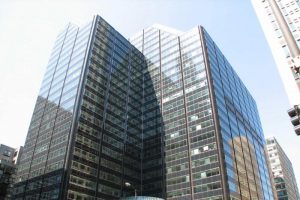 In the spring of 1989, Dala Holding acquired one large office building in New York City and two in Chicago for a total value of US$630 million. This transaction is believed to be one of the largest real estate transactions by a European investor in the U.S.A. The total office space acquired amounted to approximately 300,000 m2. In early 1989 Dala Holding also acquired prime property in the West End of London, at 16-18 Connaught Place. 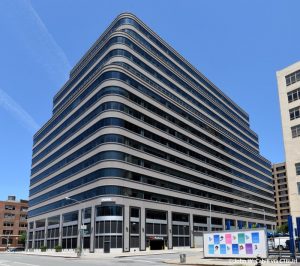 In mid 1988, Larmag acquired the Head Post Office building in Amsterdam from the Dutch Post Office & Telephone company (P.T.T.). It is one of the largest remaining historic buildings in the center of the old city, situated directly opposite the Royal Palace, which is on Dam Square, the heart of Amsterdam. The construction of this magnificent building was completed in 1899. It is built in typical neo-gothic style and was designed by the famous Dutch government architect, Cornelis Hendrik Peters (1847-1932). 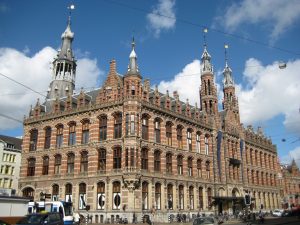 During 1990 and 1992, Larmag carried out a magnificent renovation and rezoning scheme which transformed what was once the Head Post Office, with counter functions on the ground floor and offices at the top, into a state of the art shopping center. Much attention was paid to recapturing the original style and character of the building.

Through the removal of ceilings and floors and very thick supporting walls, two new atriums were created on either side of the existing atrium in the main hall. This created a more spacious atmosphere, which is intensified through the enlargement of the glass-domed roof, allowing for more daylight. The two new atriums are separated from the main atrium by bridges adjoining the galleries. In this way the central area of the building melts into one large open space around which the shops are situated. 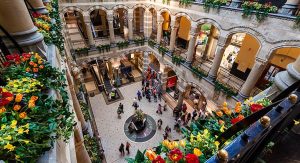 The most significant alteration to the outside of the building was the main entrance, which was somewhat inaccessible and not suitable for the building’s new purpose. Therefore the narrow passages on both sides of the entrance were widened and the access from street level improved by the erection of easy to climb steps, an escalator and a lift. This also provided access to the disabled.

In February 1997, Larmag acquired a major interest in Probus Estates PLC, a small real estate company listed on the London Stock Exchange. The successful Magna Plaza Shopping Center was sold to Probus Estates in exchange for the issue of new Probus Estates shares. A major restructuring programme within Probus Estates was carried out which had a positive effect on the company’s profile.

Other high quality opportunities throughout the rest of Europe were also explored. The focus was not only on commercial properties but also included leisure related projects. In November 1997, Probus Estates concluded a transaction to acquire a real estate portfolio for Euro 29.1 million. This real estate portfolio included two office buildings and two warehouse and office complexes in Amsterdam and the surrounding areas.

In June 1998, Probus Estates acquired a further six office buildings in the vicinity of Amsterdam. For the first time in its history, Probus Estates’ revenues exceeded expenditure. It was the policy of Probus Estates to pursue investment opportunities in Europe that showed good returns and sound growth potential. 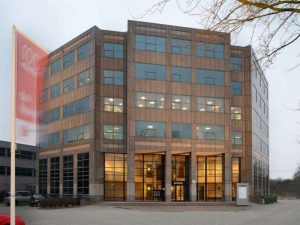 In May 1999 Probus Estates sold its subsidiary Premag Holding B.V. with a substantial profit to a Dutch public investment fund for a total amount of EURO 127.5 million. Premag Holding�s portfolio consisted of 14 properties in the Netherlands, including the Magna Plaza Shopping Centre in Amsterdam.

After Probus sold the above-mentioned real estate, in the year 2000 the company Probus acquired five commercial properties in The Netherlands for approximately EURO 35 million and at the end of the year Probus acquired the Casino de Mallorca for EURO 22 million located 15 minutes from Palma, including 52,000 m2 of prime land at the seaside where the casino building is located. The idea was to move the Casino to another location and sell it, and develop the 52,000 m2 landsite at the seaside.

During the years 2001 and 2002 Probus made further acquisitions in Spain being a development of a shopping center in Santa Ponsa, Mallorca for EURO 10 million. At the end of 2001, Probus acquired a 2 million m2 prime development site for residential development 20 km west of Barcelona, Spain. Further plans for the Casino were to prepare for the redevelopment of the Casino site as well as the residential land in Barcelona.

Probus Estates was the main real estate vehicle for the Larmag Group between 1997 up to January 2003 in which time L.E. Magnusson resigned from the Management and the Board of Probus Estates due to a difference of opinion on how to develop the business in general and in particular with the Casino and the land in Barcelona. At this time Mr. Magnusson left the company and Larmag’s shareholding was approximately 26%.

As of the second quarter of 2003, Mr. L.E. Magnusson and the Larmag Group made new plans for a new real estate investment company, this time Larmag being the controlling shareholder. The main objective for this property investment company was to focus on real estate with the highest possible return without compromising the quality and assurance of a secured long-term stable income stream.

This has been an important factor since the Larmag Group intends to pay, in the future, an attractive annual dividend to its present and future new shareholders without jeopardising the annual income to support the company’s fixed payment such as interest, amortisation on mortgage, senior debt, interest on the junior mezzanine debt and maintenance and management costs etc. In the present market, the German real estate market seems to be the best market to meet these objectives. Larmag will focus on offices, shopping centers and warehouses as well as residential apartment buildings.

As of the beginning of 2004, the Larmag Group has been very actively pursuing and focussing on investments in the German real estate market. As a result of this, the first acquisition took place in February 2005 of a 25,000 m2 newly built shopping center in Berlin and 376 apartments in Munster and at the end of December 2005, the Larmag Group acquired a portfolio of 14 office and warehouse buildings in Germany with a total surface of approximately 61,500 m2.

Properties in Germany owned by Larmag 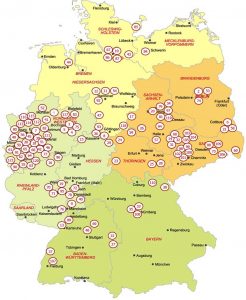 Larmag has continued to pursue the German real estate market during 2006 and 2007 by acquiring properties at another 37 locations in Germany with a total lettable area of approximately 374,000 m2. The total value of real estate acquired in Germany by Larmag during 2005, 2006 and up to June 30th 2007 is approximately EURO 660 million.

Larmag plans to continue to acquire more real estate in Germany in the near future.

Further to the above mentioned, Larmag has an interest in another major commercial German real estate portfolio with a value of approximately Euro 300 million.

The total value of real estate acquired in Germany by Larmag between 2005 and 2008 was approximately Euro 1 billion. The interest in two of the three portfolios was disposed of gradually during 2008 and 2009.

Since 2008 the Larmag Group have been working on acquiring know-how relating to the renewable energy sector mainly in Europe and particularly in the solar business in Spain.

As a result of this, Larmag Energy Group (LEG) was established in 2008.  LEG has continuously built up an international network for renewable energy and researched different opportunities and markets.

A number of real estate transactions were evaluated which resulted in an agreement to acquire a Swiss commercial real estate portfolio.

The Swiss real estate portfolio was sold at a profit for CHF 41m.

Larmag has evaluated and negotiated several real-estate portfolios in the Netherlands. In November Larmag & partners acquired a real estate portfolio in Amsterdam consisting of 12,755 m² office space generating an annual rental income of about Euro 1,9 million.

During 2018 Larmag focused on acquiring commercial properties in the Netherlands and acquired approx. 48 000 sqm LFA of commercial  space. The acquisitions comprises six properties of which 90% is office space and 10% retail space. The properties have an occupancy of approx. 80% and the vacancy presents interesting asset management opportunities for Larmag. The Dutch market has continued to improve During 2018 and Larmag is very optimistic toward leasing up large parts of the vacant and has already several discussions with potential tenants.

In 2019 Larmag continued to focus on acquiring commercial properties in the Netherlands and acquired approx. 89 000 sqm LFA of commercial space in the country. The acquisitions comprises nine properties of which 38% is office space, 52% retail space and 9,5% is industrial space. The properties have an occupancy of approx. 93% and the vacancy presents interesting asset management opportunities for Larmag. The Dutch market has continued to improve During 2019 and Larmag has been successful in renewing existing leases and leasing parts of the vacant space in the Dutch portfolio.